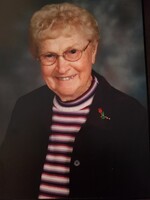 Helen Hammer (nee Gergely) went to be with her Lord at the age of 90 years in Medicine Hat, AB on
January 13, 2021. Helen will be lovingly remembered by her sons, Perry (Marcy), Greg, Geoffrey (Melinda); grandchildren, Delanie Hill (Paul), Brittney Hammer (Clint), Nicole Tisnic (Trent), Christopher Hammer, Brett Hammer, Joshua Hammer (Corey); great-grandchildren, Kailyn, Farrah, Samuel, Lucas, and Wyatt; numerous nieces and nephews; as well as all the students whose lives she has touched over the years. She is predeceased by her husband, Oswald “Ozzie”; parents, John, and Susan Gergely; son, Lorne; brother, John; sister, Beth; brothers-in-law, Tony Ganzer and Willard Mitchell; and sisters-in-law, Esther Mitchell, Rosemary Gergely, Yvette Hammer and Eileen Hammer. Helen (Ilonka) Hammer was born February 9, 1930 at home in their sod house located on SE 25-16-29 W3. She went to school from grade one through ten at Olevean School. She obtained her teaching certificate at Moose Jaw Normal school after which she returned to Olevean school in 1948. She went to teach at Golden Prairie School in 1954, were she remained until her retirement in 1988. She married Ozzie Hammer February 5, 1957 in Maple Creek, Saskatchewan. They bought the home farm 3 ½ miles south in 1959 which was a mixed cattle and grain farm. They had four children: Lorne, Perry, Gregory, and Geoffrey. In 1990, they bought the Hector Schneider farm 6 miles west of Maple Creek where they went to semi-retire until their move to Medicine Hat, Alberta in 1997. Helen was a woman of great faith. She was a great cook and seamstress and passed her knowledge on to her students as well as ensuring her sons knew how to cook and sew on a button. She never had idle hands, there was always work to be done in her beautiful vast garden and flowerbeds. She was an avid reader and she also loved sports, especially the Roughriders and curling. She could debate on any topic. She was a wonderful teacher, mother, and ranch wife. She had more energy and worked harder than anyone. She was upbeat and always had a smile on her face. Vigil Rites (Prayers) will be held at SAAMIS MEMORIAL FUNERAL CHAPEL, 1 Dunmore Road SE, Medicine Hat, AB T1A 1Z5 on Wednesday, January 20th at 7:00 pm. The Funeral Mass will be celebrated at HOLY FAMILY PARISH, 1451 Strachan Road SE, Medicine Hat, AB T1B 4V3, on Thursday, January 21st, 2021, at 1:00 pm with Fr. Rodel Abanto, Celebrant. Due to Covid-19, attendance at services is by family invitation only. However, you are invited to view the prayer service via livestream through Helen’s memorial page at www.saamis.com and the funeral service via livestream through You Tube via Medicine Hat Holy Family Church. Memorial gifts in Helen's memory may be made to the Alzheimer’s Society. Condolences may be sent through www.saamis.com or to condolences@saamis.com subject heading Helen Hammer.

All rights reserved. This obituary is also archived at obittree.com